The hottest food venue in West Orange just opened! Chit Chat Diner has a vision and interior that matches the high-quality food they prepare.

With 3 realistic forged Iron Beech trees growing over picket fences for room dividers, along with superbly furnished and designed interior decor, this venue offers exceptional visual fare as well as very tasty delicious cuisine. The Trees were a vision from the direction of the owner and the designs were tweaked, different species of trees were evaluated, bark textures, leaves, finishes, etc. until the current design was finalized.

The trunks were formed first, with the realistic bark peel and the fungus created as well. Realistic knot holes were created, “cracks” in the bark, other details added as the imagination from the craftsman flowed into the tree. Then branches were created, twigs and leaves hand forged, as well as eyes just like real beech trees. The fence was created to have similar visual as the exterior fence on the cliff. the picket tops were forged, just like they would have been created by Samuel Yellin 100 years ago.

The finish was a traditional antique blackening process that highlighted texture and character of the inherent metal and forge process for the trunk and branches. Then encapsulated with a clear lacquer which was also applied to the twigs and leaves to preserve the forge marks.

Also, there were some added items as a thank you! Squirrels were forged for each tree. they have a magnetic base and can be moved around the tree. Also some of the branches spell the husbands and wife’s names in Greek!

The food is excellent, interior decor exceptional with beautiful Iron Sculptures along with the views of NYC skyline makes for a experience at Chit Chat Diner in West Orange a truly one of a kind experience! 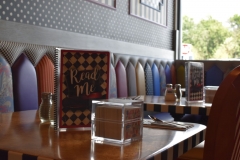 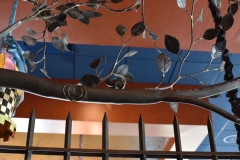 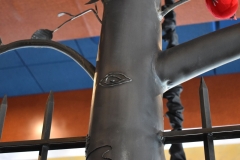