The terms “wrought iron railing,” “wrought fence” and “iron gate” are descriptions used every day despite the fact that wrought iron material is hardly ever used today.

The term wrought, which means “worked” as used to describe the method in which iron was made, dates back to the 12th century. In the 12th century, “wrought iron” was discovered by using a mixture of coke and iron ore and firing it together in a large furnace. A tuyere forced air in form the side, creating even hotter temperatures. The coke burned, heating the ore to melting temperatures of around 2,000°F. The iron ore then melted together, forming a “bloom” of semi-molten iron. This bloom then had to be hammered, worked, or “wrought” to the correct bar size, which required extensive amounts of labor. Because the bloom had to be worked hot in order to move the desired shape, it had to be reheated constantly. Imagine the extensive work required to take a 20” diameter bloom of material and forge it to 1” square bars to make a wrought fence.

This wrought iron had an inconsistent texture as a result of all this hammering, plus a fibrous structure and almost no carbon content. This texture gave wrought iron its distinctive appearance and the absence of carbon is why it does not corrode.

The Bessemer steel process was invented in 1888 and made for stronger, smoother, and purer content. This A-36 steel also has a much higher carbon content, which is why steel rusts much faster than projects built hundreds of years ago. It did take decades for the steelmaking process to become streamlined and cost-effectively produced. It was not until the 1930s that wrought iron eclipsed steel. By 1940, wrought iron was on its way out. Today, it is no longer commercially made. 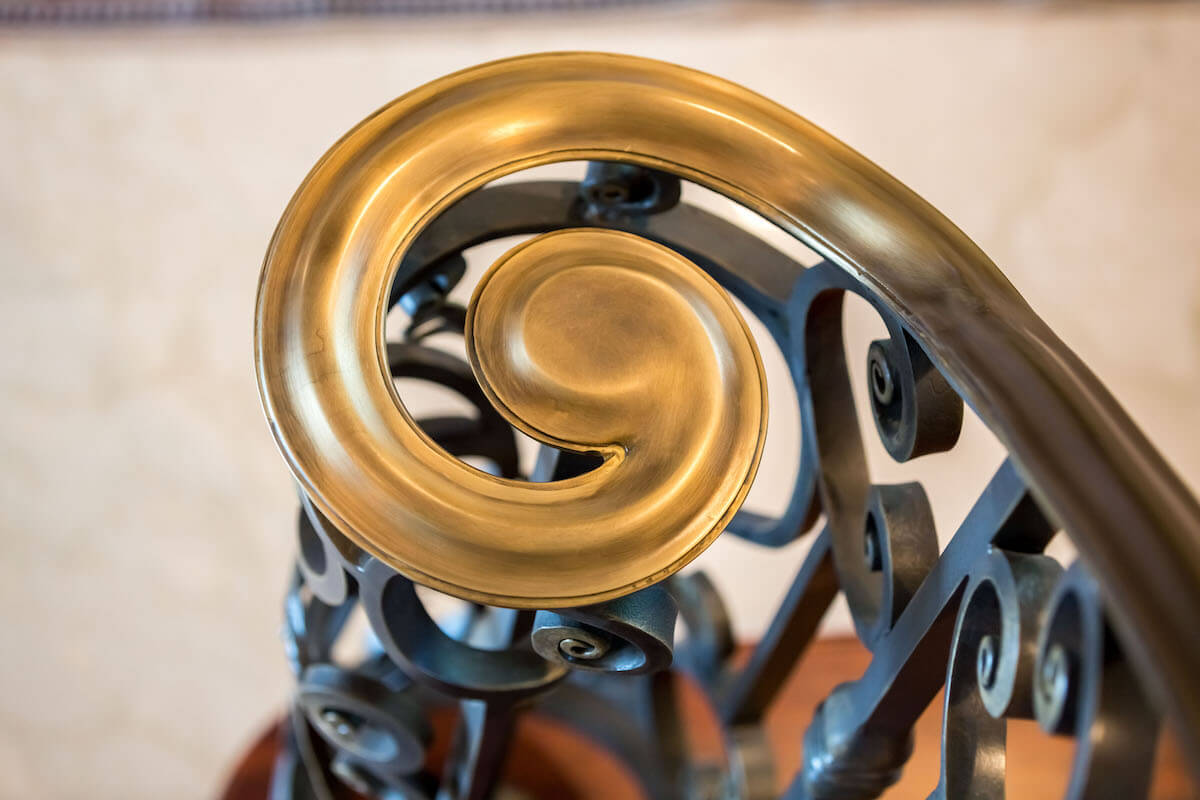 Compass Ironworks developed a process to create “wrought” material, taking today’s iron or A-36 steel, with the forge and a 100 yr old power hammer. This process recreates the same visual texture on the surface and irregular and inconsistent edges of wrought iron. This material is also eco-friendly as it’s created from 97% recycled content.

One material that we have used with a high level of success is solid aircraft grade aluminum. We can forge it, although it is a little more of a challenge. Finished or powder-coated correctly, it is indistinguishable from iron. For one client, we created a new picket fence and while installing it, were asked, “Where did we get the old fence?” We had a hard time convincing them that it was not an old wrought fence. A security gate, wrought iron garden fence, spiral staircase and wrought iron railing can as beautiful as it is eco-conscious. 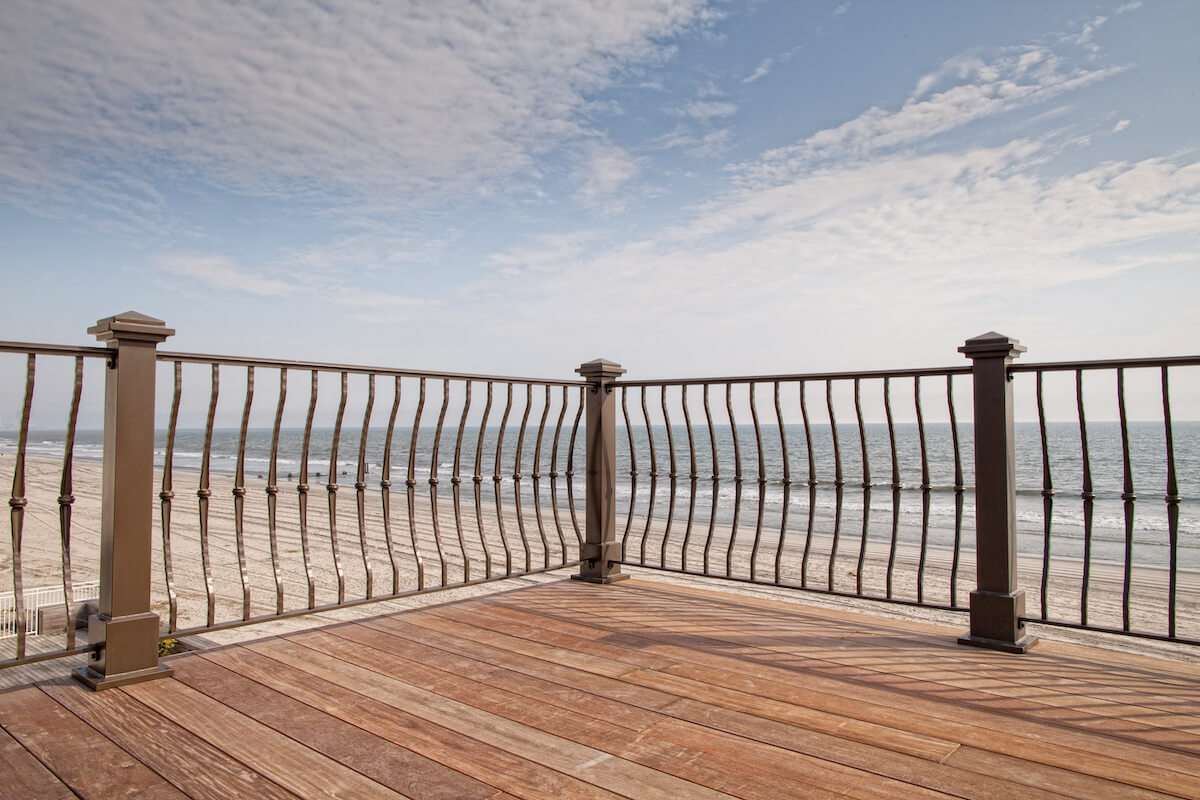 For deck railing applications at the shore, normal off-the-shelf castings have a zinc and copper content. When exposed to salt air environment, they will have a galvanic reaction, similar to a car battery terminal, which will corrode at an accelerated rate of speed. For all shore applications, we have castings custom created with the zinc and copper content replaced with magnesium. This is alloy 535, the same alloy that the U.S. Navy specifies for all its naval applications. The downside of this alloy is then it needs to be poured at a higher temperature, therefore higher cost, but it also picks up residual gases when poured into the mold, resulting in trapped gases within the castings. Our protocol is to bake at 600ºF for two hours to eliminate the impurities.

The bottom line is that we can create aluminum fence, driveway gates and porch railings that have non-corrosive properties, but are indistinguishable from old wrought iron railings. Another alloy that we use to add depth, contrast and character, is brass or bronze. The most frequent use is for interior design railings or stair handrail at the cap-rail, on top of ornate scrollwork. We have at times used it on an exterior staircase to accentuate a forged aluminum deck railing. For a sleek modern visual, brushed or polished stainless can create a visual impact, especially on a floating modern staircase. 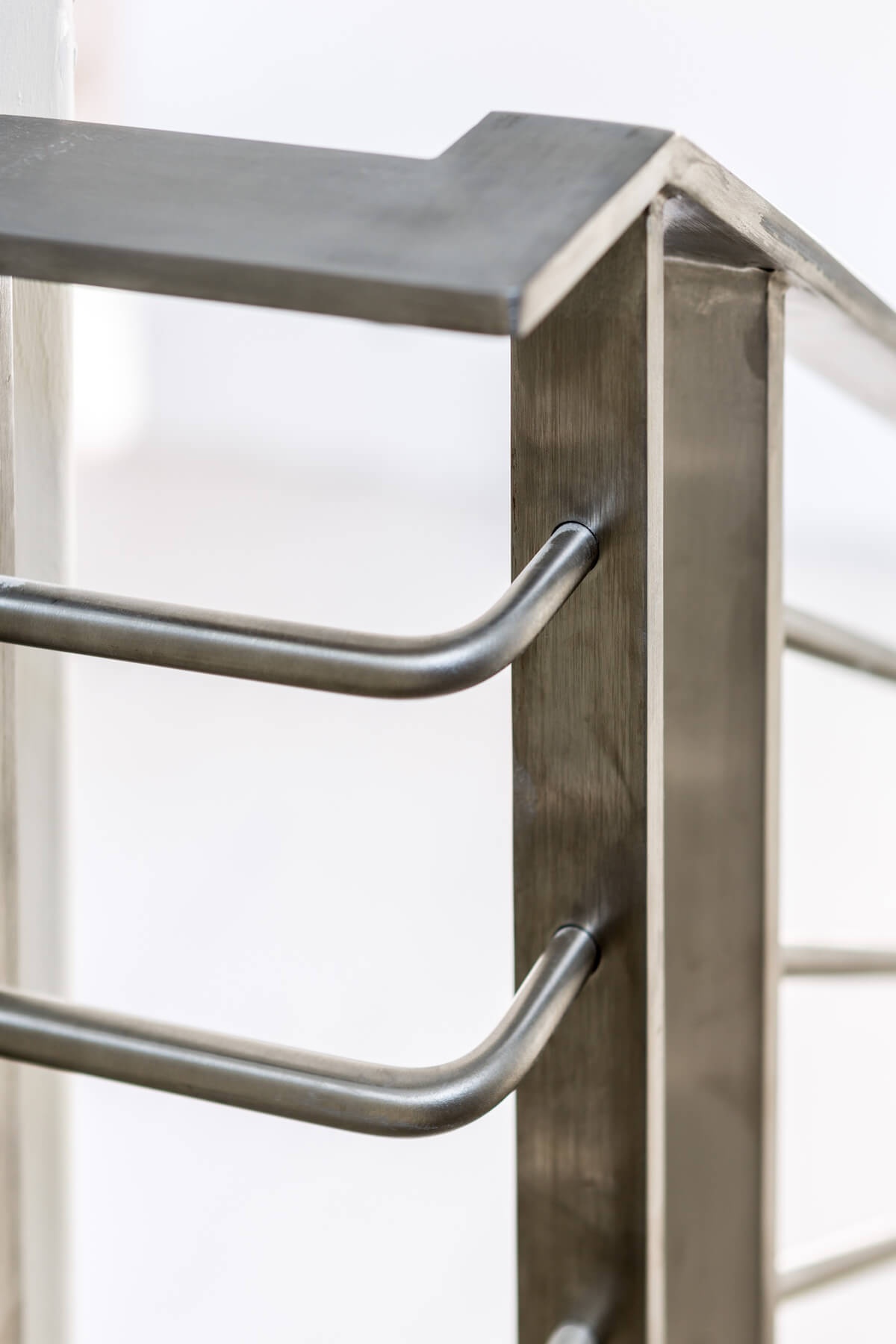