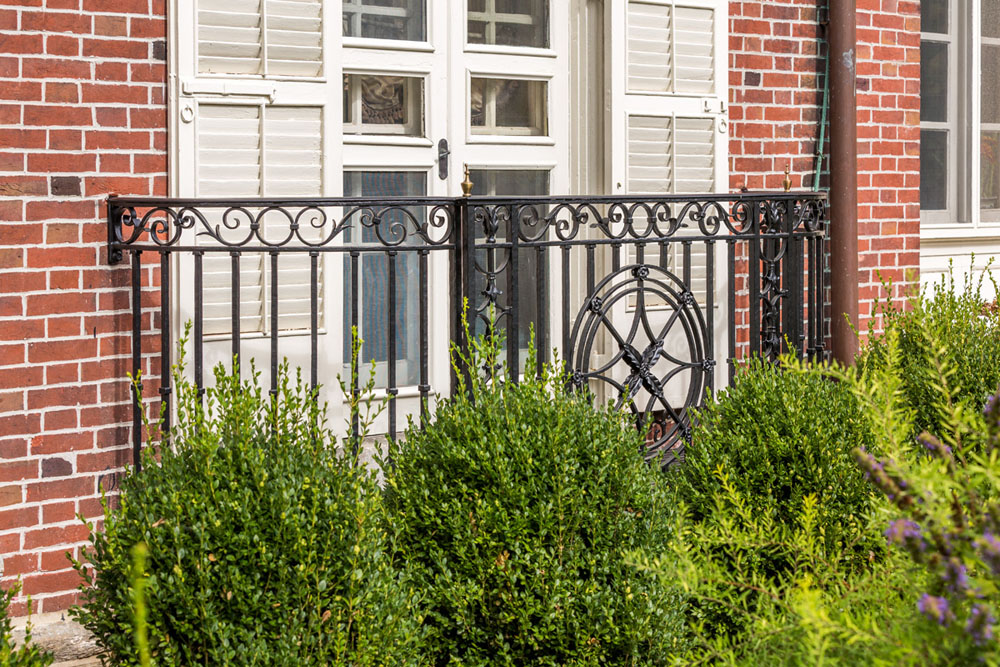 We were contacted by a homeowner that had a beautiful home that had been splendidly built in 1915. There was beautiful forged iron work on various steps, terraces and balconies that had been neglected for the past few decades.
By far the biggest challenge was the original mounting procedure. For maximum structural integrity, the original builder had built the wood structure of the house, then the iron craftsman mounted the balconies directly to that structure. Then the mason applied 2 layers of Flemish bond brick in front of the wood structure, totally encapsulating any chance of detaching from the original anchoring points. All the structural frame extended through the brick to support the balconies. The solution was to cut all the horizontal structural members approximately 6” from the brick so that we could remove the entire structure to our shop to strip, pretreat, and powder-coat in a controlled environment.

For corrosion prevention, the original protocol was to strip down, then hot-dip galvanize and powder-top-coat. When we stripped the multiple layers of paint, we found the structure to be badly corroded and in dire need of multiple improvements. This condition had been concealed by the many layers of paint. We also found something else, a small unassuming name stamped into the metal: Samuel Yellin Phila PA. This totally changed the dynamics of the project. Had the client had any interest in selling those balconies previously, they would have netted $2,000-3,000 each, but with this revelation, their value was placed at approximately $25,000 each, 7 balconies plus terrace and stair railings. We also totally re-evaluated our finishing approach. The hot-dip galvanizing would have totally obscured the Yellin stamps. However the project still had very detailed scrollwork, leaves and rosette’s which resulted in hard-to-penetrate nooks and crannies for finishing purposes.

We selected an E-coat, to still encapsulate those hard-to-reach areas but would not compromise the legibility of the Yellin Stamp.
There were still various replication challenges to create the bouquet leaves, rosettes, acanthus leaves, and scrollwork. Some details were totally gone, but drawing on experience of Yellin’s work and detail, these pieces were re-crated to be deemed historically correct.

Another revelation in the stripping was that all the remaining painted finials had actually been created from solid bronze. There were 3 distinctly different variations of finials that were re-created in bronze. These were antique tarnished to match the others and an automotive clear coat was applied to preserve the classic beauty.
To reinstall, the cut pieces of the horizontal structure, an innovative solid aluminum block 1”x 3”x12” was created into a wedge to allow it to be tightened into the 3” channel structure and provide rigidity to the same level of the original installation.

The entire project took approximately 6 months to complete and was extremely laborious. By the time everything was completed, there were budget overruns, but the integrity, structure and detail of this 100 year old Iron masterpiece was given a brand new lease on life to inspire future admirers of beautiful craftsmanship for the next century.