Compass Ironworks was awarded the Gold, Silver, and Bronze prizes for its submissions at MetalFAB, NOMMA’s national conference. In addition, Compass was the recipient of the Mitch Heitler Award for Excellence, the highest award conferred by the industry, worldwide. This is the first time EVER that this award has been brought to Pennsylvania. The annual conference of NOMMA (the National Ornamental and Miscellaneous Metals Association) was held this March in Greenville, SC. The keynote of the conference is the Ernest Wiemann Top Job Competition, where craftsmen from the United States and seven other countries showcase their finest works.

Compass Ironworks is a family business in rural Lancaster County, PA, Here, a small group of dedicated craftsmen creates beautiful masterpieces in metal, using a blend of traditional techniques and cutting-edge finishing technologies to create gates, fences, railings, and doors to surpass the most demanding requirements of our clients. 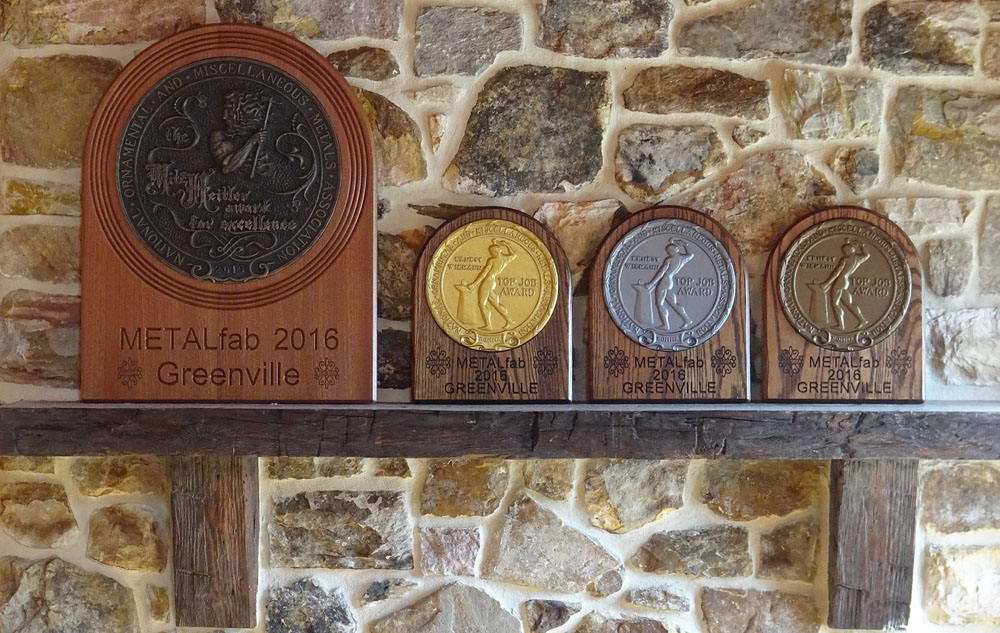 The line-up of awards that Compass Ironworks Received. The Mitch Heitler Award for Excellence, a Gold, Silver, and Bronze award.

To win the Heitler Award, Compass presented a set of fourteen decorative security doors, inspired by an eighteenth-century Italian design. The frames were created from custom extruded aircraft grade aluminum, and were designed with removable glass, custom designed hinges, a unique texture and all hand-forged scrolls. 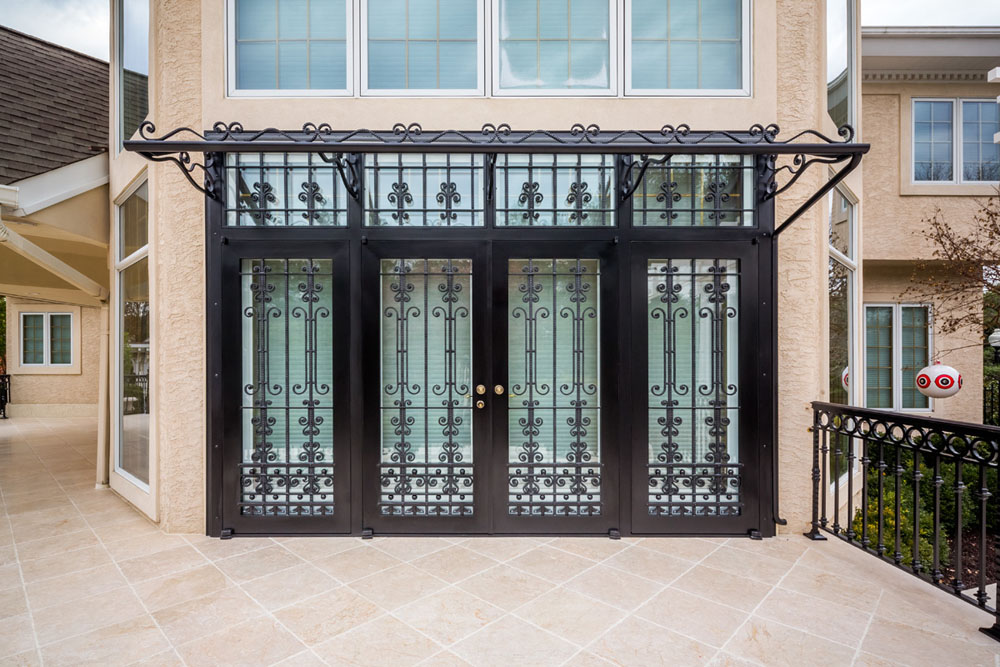 These are 4 of 14 doors, in the project that won the Mitch Heitler Award for Excellence in Craftsmanship

The award winning design was commissioned by a client who desired a modern reproduction of an original work from 1742 Italy. Only the finest materials and workmanship would suffice for this most demanding endeavor. The customer was deeply involved in the entire process, from conception to installation. Amos Glick, President of Compass Iron Works, remarked: “Every segment of this project was a challenge, from the metallurgist husband, to the designer wife, we provided samples on EVERYTHING; hinges, latches, hardware, finishes, material, etc. They dissected it and desired improvement.” 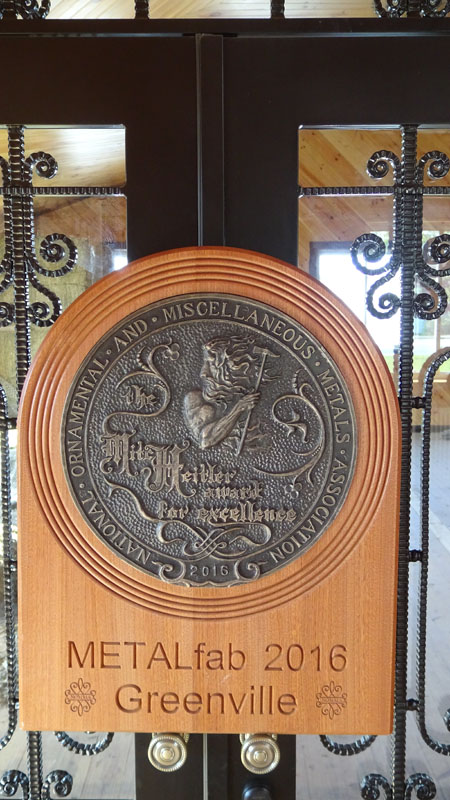 The doorframes were constructed from custom extruded aluminum with recessed glass frames.   Custom stainless door pivot hinges and invisible stainless glass hinges were chosen, even though standard components could have served. Marine grade finishes and solid bronze latch hardware were employed. No detail was too small. Absolute perfection was the objective.
When fabrication started, we understood the level of precision the client demanded. We took extra time to clean and sand every detail. Some doors were installed three times until there was not a blemish, pinhole or sander mark visible. The time to completion was nineteen months, and consumed over 3000 hours of painstaking labor to produce a true work of art.
The Silver award winner was a 9’6” intertwined aluminum heart sculpture.   The most difficult part of creating this beautiful work was the intricate knot at the base. The figure was treated with a simulated bronze finish, which took three agonizing weeks to perfect. 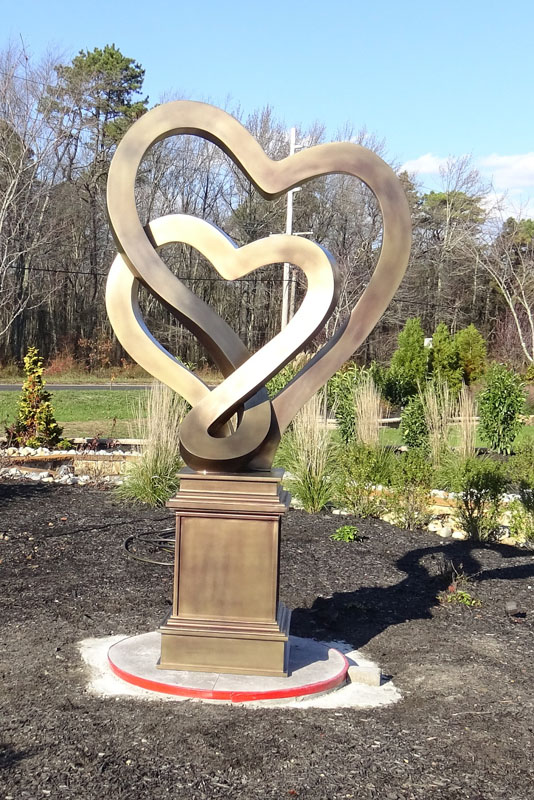 The Bronze award winner was a balcony and railing restoration, originally created in 1915 by Samuel Yellin, the renowned Philadelphia blacksmith. 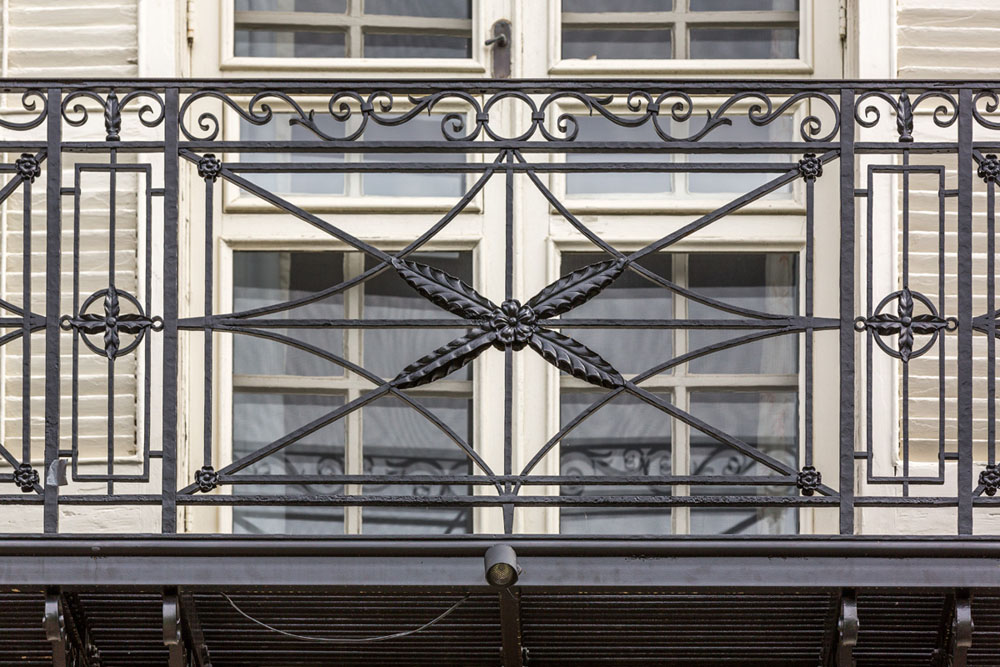 This year, over 150 entries in several categories were presented for judging. All awards are decided by NOMMA members, who vote in a blind presentation of each project.

Participants use this contest as an arena in which they can showcase their craftsmanship, as well as the design creativity of the architects, designers, and clients who commissioned the submitted works. To receive any award in this contest is to be honored among one’s peers in the industry. To receive Gold, Silver, and Bronze awards is an overwhelming accomplishment for Compass.

The Heitler award is selected by a jury from the gold award-winning submissions. “The jury looks for the best project, from among the best, that represents our industry, but also, if any of our members had to create this project, it would stretch their limitations. This project is a fine example of both aspects,” said Justin Pigott, chairman of the NOMMA Top Job Committee.

From the Diary of Amos Glick:
“The Top Job Awards Banquet was the highlight of the entire 2016 Conference. Compass had entered 5 projects into the competition, 5 of the 17 categories. The first part of the awards, Compass did not get anything. Not until category K, did we get an award. A Gold for the door project, then a silver for the Heart Sculpture and a Bronze for the Samuel Yellin Restoration project.

In my Dreams, the 14 doors were Mitch Heitler caliber, but when we saw the competition. A tree door with 1,800 little red flowers from Florida, a wine cellar door from Chicago, either had a lot more wow factor, but we had been looking at our doors for almost 2 years.

After all the Gold, Silver and Bronze awards, it was time for the Mitch Heitler. The Chairman talked about its significance and then “The 2016 Mitch Heitler Award for Excellence in Craftsmanship goes to….Compass Ironworks.”
The Room broke into applause, there was a standing ovation. Patrick, from New Jersey, who we traveled with and who was part of our table, came flying out of his chair like he had springs on the seat of his pants. I had to walk up to the stage for the 4th time, once for each of the other 3 awards.

Had I not had a warning that I would be giving a speech, they would have had to carry me to the stage, I was that close to shock. They handed me the 60lb award and then clamored for a speech. I spoke a few words about the project, this is not just about me, but our entire team was a part of this phenomenal project and now this incredible moment. Also, about the industry, the organization, I was interrupted a few times with clapping and cheers. Then another standing ovation when I came offstage. Wow, what an absolutely incredible experience, being awarded the best of the best from industry peers. I was so humbled and honored at the same time.

If there was ever a photo op that I wanted, it was walking out after the banquet. Me with the big Mitch Heitler Award for Excellence in Craftsmanship, Susie with the Gold Top Job Award, Naomi with the silver and Katie with the bronze. It was incredible…..and I am still getting used to the fact that the highest award globally achievable belongs to Compass Ironworks.”

Click Here to see the Entire Lineup of Award Winning projects. The Mitch Heitler is at the very end.